"TECHNOLOGY FOR SAFETY AND COMFORT"

ISRINGHAUSEN is the global market leader in the development and manufacture of innovative seating systems for commercial vehicles as well as technical springs. Our products are used in trucks, buses and construction equipment. 52 plants across 20 countries form the backbone of our manufacturing infrastructure.

The company has operated since 1919, when it began as a manufacturer of bicycle seats and springs. ISRI designed the first 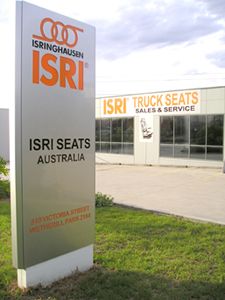 ISRI seats were sold in Australia by a Licensee from 1977 until 1993, when the decision was made to establish a wholly-owned subsidiary of ISRINGHAUSEN in Australia. The objective was to strengthen the marketing of the product with direct company representation and to provide direct factory service and parts support for our customers in Australia. The success of this strategy is evident in the growth of market share since 1994. ISRI seats are now fitted as standard original equipment by three of the four truck manufacturers in Australia, and ISRI is the premium factory option for the fourth OEM. ISRI drivers seats are also fitted to 90% of new buses and coaches built in Australia. ISRINGHAUSEN Pty Ltd was incorporated in February 1994 and ISRI products are distributed from the company's warehouse in Wetherill Park, Sydney, direct to OEM customers, and through a dealer network to aftermarket and trade customers.

ISRI seats are designed to meet or exceed internationally recognised ergonomic and safety standards and the company is certified to the ISO9001 and QS9000 Quality Standards. At the ISRINGHAUSEN Head Office and factory in Lemgo, Germany, approximately 140 persons are engaged in product research, design, testing and development. Advancement in product design and technical excellence is our major strategic objective, which has taken the company to market leadership. ISRI seats are generally regarded as the standard for technical advancement and ergonomically effective operator seats. This status is reflected in ISRI's dominant market share in Europe, a market strongly focused on driver safety and comfort.